We are glad to announce our $50m liquidity mining program on Arbitrum, the largest initiative on Arbitrum so far. Similar to our initiatives on Ethereum and BSC, the program will focus on incentivizing lending and borrowing of major cryptos, minting of USX/EUX and liquidity provision for our synthetic assets.

Please be noted that the incentive rewards are given out in dForce governance token, DF token (which is liquidly traded across dozens of exchanges, including Binance, Huobi, Uniswap, Pancakeswap etc), also be noted that DF hasn’t been bridged to Arbitrium (due to technical restriction of current bridge), so the liquidity mining rewards will be distributed on per block basis by ONLY claimable upon enabling of Arbitrum DF bridge (which is expected soon).

“I-Still-Feel-Summer” Genesis Liquidity Mining of on Arbitrum will kick start from 9pm UTC+8, 14 September, 2021. Please keep a lookout for any gauge adjustments which will be assessed and adjusted on a weekly basis, and released to the public via Twitter and Forum.

A daily total of 100,000 DF will be distributed through liquidity mining to users participating in lending, borrowing of major cryptos and minting USX and EUX (dForce’s native USD and EUR stablecoin) on dForce, it includes USDC, USDT, USX, WBTC, ETH, UNI, LINK and EUX, with the following gauge: 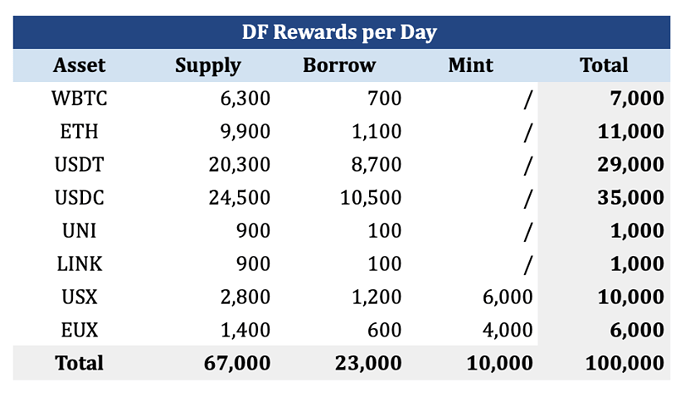