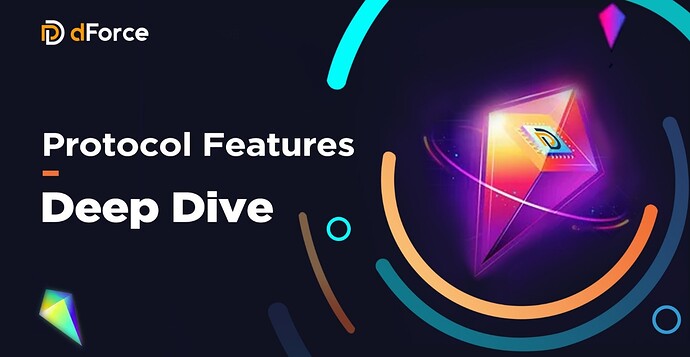 Following our previous post on dForce’s grand upgrade, today, we wanted to dive deeper and explain the new features that represent this exciting new phase for dForce.

Our core protocols are now battle-tested with more than $300m staked in our network across Ethereum, Arbitrum, Optimism, Binance Smart Chain, and our plan is to expand the existing core stack of protocol offerings while minimize the security risk.

On the protocol and utility, we are going to vastly expand the utility of our core lending and stablecoin protocols and revamp the DF tokenomics accordingly for value accrual. Such protocol features will include:

Vaults : Segregated vaults catering to single collateral with isolated risk parameters. This will include yield tokens as well as other novel crypto assets. This will be a great addition to the current pool model; we expect a big boost for USX minting.

There will be Treasury vaults specifically setup to help to utilize idle Treasury DF token and other assets for expanding the USX supply. We have normal vaults, which will mainly support collaterals outside of dForce’s ecosystem, and Treasury specific vaults, which will carry out treasury management and liquidity provision operations. The Treasury vault minting will be over-collateralized, however, there won’t be liquidation event for the treasury vault. Here is the previous article explaining our Vaults features.

Bridge: We already built our bridges connecting Ethereum and its layer 2 (Arbitrum and Optimism), which allow users to move their USX from Ethereum to other layers. This feature allows USX to be fully fungible between Ethereum and L2, and also allow USX to serve as credit facility to move other assets across. For example, you could deposit USDC on dForce lending on Ethereum to mint USX and bridge over to Arbitrum, deposit there and borrow USDC out. This essentially allow you to deposit collateral on Ethereum and borrow on L2. This vastly increases the capital efficiency for users.

We can further utilize the bridge to shuttle any asset across different layers and even across alternative L1s, i.e from Ethereum to BSC, etc.

The first stage of the bridge will mainly be bridging USX and EUX across different layers and chains, and at later stage, we will introduce more generalized bridges to facilitate other assets bridging to act as general public bridge infrastructure.

Protocol-Direct-Liquidity-Provision (PDLP). This model re-engineers the way we used to mint USX and EUX. The current model is user-generated model, where all USX and EUX are minted by users by using their collaterals. PDLP is to introduce protocol-owned USX/EUX supply directly to lending protocol and DEX to bootstrap liquidity and increase protocol-owned assets.

PDLP uses the underlying deposit certificate as collaterals, i.e., to mint USX with iUSX (certificate of USX deposit) as collateral, you are actually minting USX (with 0% interest) against yield carrying USX, hence the collateral ratio will always be more than 100%. By carrying out PDLP, USX protocol effectively becomes the USX supplier to lending protocol and DEX, and own the supplied liquidity. Borrowers in the lending protocol still need to provide collaterals for borrowing USX, so effectively USX loans are always overcollateralized. It also changes USX’s revenue model from earning minting interest rate to earning USX saving rate in secondary lending markets.

We can also extend PDLP to providing liquidity in DEX for USX/EUX, USX/DF, and more pairs with combination of treasury operation.

While many DeFi 2.0 pursue protocol-controlled assets (PCA) as their major feature, what we proposed as POO is a great expansion of PCA model and take it further. PCA is mainly to allow protocol to own its asset and liquidity, it is the supply side solution, what POO do is basically aim at solving both the supply and demand side issues.

Not only will POO allow the protocol to own liquidity and assets in its treasury, but also act as counterparty to its underlying functional protocol and a super user (i.e., borrower) of its own protocol. For example, the Protocol-Owned-Staking-Asset feature allows dForce to borrow underlying staking token (borrower) at optimized utilization rate and stake these borrowed assets to earn yield. That said, dForce will earn not only the interest spread between borrowing and saving rate, but also the spread between staking yield and borrowing rate.

Below we go through some of key POO primitives:

Protocol-Controlled-Treasury. This allows treasury assets (i.e., stablecoins, BTC, etc) to be deposited into dForce lending protocol and other DEX to earn yields/fees. Controlled-Staking-Assets. We are partnering with Liqee for integrating this feature. As mentioned above, it allows dForce lending protocol to borrow underlying staking tokens and convert into tToken (staking token representation by Liqee), or to borrow ETH and convert into wstETH to supply as collateral.

The model will significantly enhance organic and sustainable borrowing for PoS tokens, passing the staking yield to PoS token lenders.

How does the protocol-controlled-staking assets work under the hood?

We are partnering with Liqee for introducing their tTokens (PoS Staking node). So, every tToken is a representation of the underlying token plus staking yield accrued. The Protocol-Controlled-Operator account deposit tToken into dForce lending and borrow out underlying PoS token, then cross-over to the respective native PoS network, then delegates to validators of choisce. 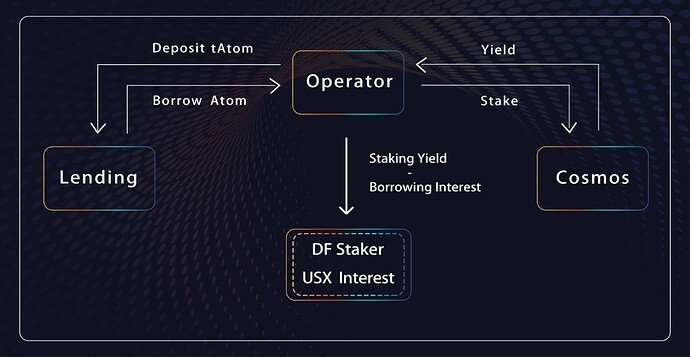 To borrow from lending pool to pair USX/USDC, USX/DAI and various other pools, it will also buy and sell to rebalance the pool and collected arb profits.

To mint USX and provide liquidity for DEX like MCDEX, DODO, or lending markets like, Liqee, AAVE, FUSE etc

We believe this is a big trend in the future for DeFi protocol to own a substantial part of real-world assets, like green infrastructure by leveraging its global liquidity.

The above protocol upgrades will enable dForce to substantially increase its capital efficiency and more importantly, further tighten its interest alignment with DF holders and reduce distraction by directing most of the protocol value accrual toward staking (v.s. liquidity mining).

Our focus over the past year was on building the DeFi layer0 primitive, while the tokenomics wasn’t really tie up with protocol utility. The new engine, however, is going to completely revamp the tokenomics. It was developed on top of our previously mentioned Tokenomics 2.0, and this proposed upgrade will take us directly to Tokenomics 3.0 and supercharge the feedback loop between DF and its underlying protocol primitive and utility.

Tokenomics is mainly about empowering DF holders to capture value across our underlying protocols, the general mechanism is via DF staking and on top of that, we also introduce many treasury management and optimization modules, which aim to further improve the mechanism and jumpstart the feedback loop between DF token and its underlying protocol primitive (USX liquidity expansion, lending protocol TVL etc).

We are going to talk more about the proposed Tokenomics 3.0 in the next chapter. Stay tuned!