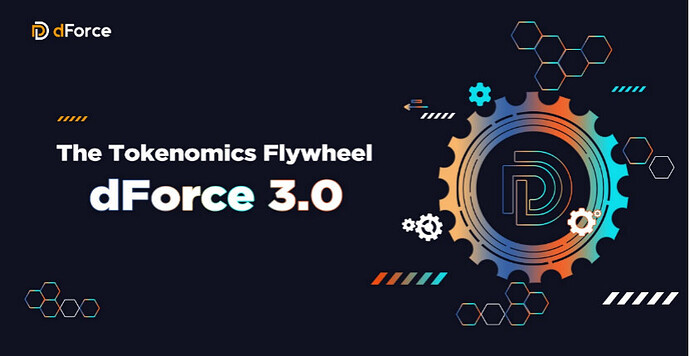 The final chapter of dForce 3.0 upgrade, we will dive into the revamped tokenomics which aligns DF token value accrual more closely with protocol adoption and TVL growth.

We are going through a complete upgrade of our tokenomics.

Let’s start from introducing the new staking module, where DF holders don’t need to rely on providing liquidity and interacting with our core protocol utility to earn DF yields. The staking will capture all value accrual, including all fees, for DF stakers.

There are three parts related to the flywheel upgrade:

DF Staking. DF staking will be introduced to provide value accrual for DF holders, capturing all fee incomes across the protocol, as well as PDLP and PCO, on top of systematic DF staking yields. We propose to introduce a hybrid staking model for DF, a combination of staking with and without lock-up periods.

Treasury-Active-Liquidity-Operation (TALO). The protocol will utilize idle Treasury assets to mint USX within its collateral limit, acquire DF liquidity from the market, and add purchased DF into DF/USX pair to own the liquidity. We also plan to acquire and ultimately own liquidity for other major pairs including USX/USDC, USX/EUX, etc. When the protocol owns majority of the liquidity, there will be no need for liquidity mining incentives for these pairs.

Treasury-Bonding-Buyout (TBB) . At a later stage, we will launch a program to further purchase LP liquidity and other assets held by the market through the sale of DF token with a discount.

Below we are going to deep dive into more details: 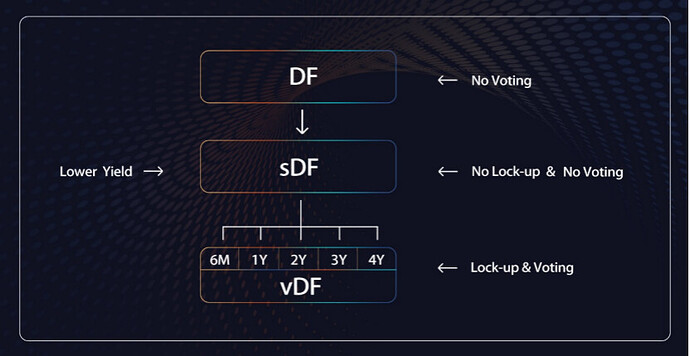 The first form is Free Staking (no lock-up), where DF holders can stake DF to receive sDF as receipt of the deposit. Staked DF can be withdrawn from the staking pool at any time with accrued rewards, however, yield will be much lower than that of lock-up pools.

DF holders can also choose Lock-up Staking with different periods. When staked DF enter the lockup pool, they will be wrapped into sDF automatically for participation in staking. DF staker will have vDF with weights to the claim of rewards and voting power calculated based on selected lock-up period. 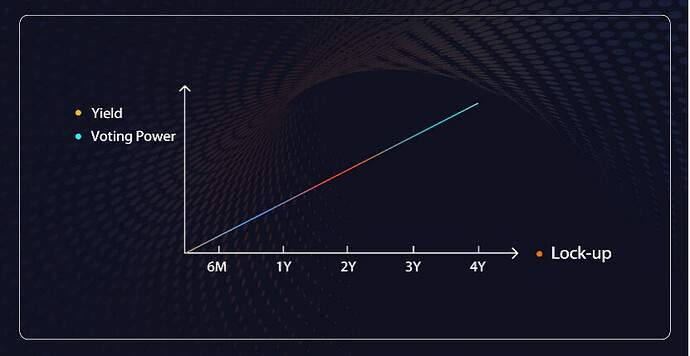 The Lock-up Staking contract will feature a time-lock commitment: the longer DF holders lock their DF token (vDF), the more sDF rewards they can share proportionally.

The discrepancy of staking APY among different pools are decided by the following factors:

Staking rewards will come from the following sources:

Part of fee income generated across dForce protocols and allocated to facilitate the purchase of DF;

Lock-up Pools (vDF): 30,000,000 DF (subject to governance approval) distributed on per block basis in the first year; governance to determine thereafter. The sDF/vDF ratio varies according to both lock-up period as well as the amounts of tokens participated in staking.

Participants can choose to lock your DF from 1 week up to 4 years – the longer you stake with dForce, the more DF you will be rewarded. For example:

2 years: each sDF could have [0.5] vDF during the lockup period;

4 years: each sDF could have into [1.0] vDF during the lockup period.

Prior to this proposal, DF can be used to participate in governance vote via Snapshot. Moving forward, we propose to migrate the voting rights from DF to vDF, meaning that:

Only participants of Lock-up Staking (holder of vDF) are eligible for governance voting;

DF and other assets held by Treasury contracts (Treasury Pool) will be used to back the issuance of USX and EUX under substantial over-collateralization (though by design, it could go under-collateralized).

The implementation of TALO and TBB will be subject to governance vote result. We expect it to be substantially over-collateralized with a proposed interest rate of 0% to encourage treasury minting. In any event, TALO and TBB are protected against liquidation.

TALO and TBB are mainly for:

Taking DF/USX as an example (also applicable to USX/EUX, USX/USDC, etc), the Treasury will mint USX to pair it up with DF for liquidity provision in DEX. By doing so, the Treasury will essentially own liquidity of these pairs and earn trading fees incurred from trading. Consequently, DF tokens holders don’t need to provide liquidity but can earn fee incomes from various sources by staking DF into the staking contract.

We propose to replace most of the existing liquidity mining programs with Treasury-Controlled Liquidity , allowing DF holders to earn passive yield by participating in DF staking, removing liquidity provision hassles and impermanent loss risks for participants. It is expected that the majority of liquidity
will be eventually owned by the protocol.

The above protocol upgrades combined with the tokenomics flywheel will result in the following feedback loop and value accrual into $DF tokens:

Protocol to own majority of the liquidity → less DF incentive inflation → less DF in circulation;