With dForce’s combo protocols (lending+stablecoin+synthetics) on the verge of launching, which is the first attempt ever in DeFi to unifying general lending, stablecoin and synthetic protocols, our protocol matrix is now complete.

dForce has the most comprehensively integrated protocol matrix, covering a variety of protocols, it is important that our tokenomics tightly aligns interest of diversified set of protocol participants and stakeholders.

DF tokenomics used to be loosely integrated with our protocols, with lending and synthetic asset protocols launch, the tokenomics will go from modest to Ludicrous mode. DF used to act as governance token for dictating decision making as well as fee token when interacting with our USDx stablecoin protocol.

But since late 2019, our protocol matrix significantly expanded and now include assets (Synthetic Asset, USDx, Goldx), Lending (dForce Lending, Yield Markets) and dForce Trade. Not it is time to upgrade the tokenomics and more tightly integrated and align the DF token interests with our protocol matrix.

Below is a high level diagram capturing the tokenomics and its utility across our matrix:

The top-down design of DF tokenomics:

We will be creating a vDF token, it is a receipt of DF staking token, where holders of DF token are able to deposit into staking contract to mint vDF. vDF can be used as general voting vehicle and staking assets and it is also a major vehicle for receiving ecosystem wide incentives.

Once DF staked into vDF, vDF is engineered such that fees from dForce Lending, dForce Trade and Synthetic Asset protocol will be periodically used to be purchase DF in the market and distribute to vDF holders. There are several fee-captures that will be proposed to be built into the protocol, namely:

DF tokens are utility token and governance tokens which allow: 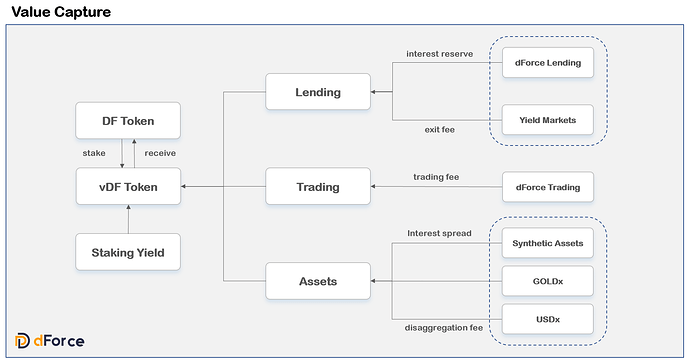 Specification of the Tokenomics

Yield Markets, a 0.1% exit fee will be charged and collected into fee account;

Trading Fee: a 0.1% trading fee in AMM (to be built) will be collected into fee account.

USDx, a 0.1% DF burn is built into the protocol, the burn is global, which will reduce DF’s total outstanding.

Synthetic asset trading fee: 0.1% is charged to give to DF token holders

Synthetic Asset ingredients : vDF is able to be used as collateral to mint synthetic assets in both the Genesis Pool and Synthetic Pool.

Lending Protocol Interest Reserve Capture: 20% of the lending interest reserve will be used to purchase DF and distributed to vDF holders.

Franchise Fee Allocation: for projects that utilize our protocol, i.e to open up a NFT synthetic asset platform, of which % of token allocated to vDF token holders

vDF is also whitelisted as collateral to mint all synthetic assets with no fee or interest charges.

System Staking Incentive: we propose a flat annual staking yield, which is similar to PoS staking. The less people stake, the higher the yield. Staked vDF token is still fungible token and can be used as collateral in both our lending as well as synthetic asset protocols and our voting system will also support vDF voting.

In the addition to system staking yield, we have implemented market purchase of DF with fee accrued in our protocols, i.e fee from specific protocols are pooled and make periodic purchase of DF tokens in the market and deposit into vDF staking pool for stakers to claim. So, the fee distribution yield will be added on top of system staking yield. Fee could come from exit fee from yield market, lending protocol’s interest reserve, dForce Trading fee charges and synthetic protocol’s stablecoin loan fees, the following specifications are proposed:

Yield Market: A flat 0.1% upon exiting yield markets will be collected into fee pool.

Lending Protocol: 20% interest reserve will be utilized to purchase DF then distribute to vDF holder once the pool exceeds $10,000.

Synthetic Stablecoin Loan: 20% of interest reserve will be utilized to purchase DF then distribute to vDF holder once the pool exceeds $10,000.

Partnership Token: For 3rd party projects that require our assistance on launching products or collaborated launch and liquidity bootstrapping etc, we will require the partner projects to reserve a portion of the token for DF token holders, those token will be distributed to vDF holders.

Target implementation by early May when synthetic asset protocol deployed.